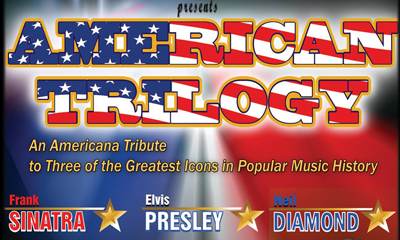 Imagine if three of the biggest icons in popular music history decided to perform a concert for the sole purpose of saying ‘Thank You’’ to the Country that has taken them from having so little and then given them so much.

For the last 3 years this original, one of a kind show has sold out all 3 nights and this year we’ll get to see if history can repeat itself (It’s been known to happen from time to time).
AMERICAN TRILOGY is a Las Vegas produced show that brings together three of the greatest and most beloved entertainers of all time – ‘FRANK SINATRA’ (Gary Anthony),‘ELVIS PRESLEY’ (Justin Shandor), and ‘NEIL DIAMOND’ (Rob Garrett)’. The show is a scripted “What If” production that will both delight and enlighten the audience as they come to realize that, during their prolific, illustrious careers, not only did these gentlemen all cross paths, but actually connected and/or collaborated with each other. The audience will see the mutual respect and admiration the three had for one another and the love and gratitude they shared for their country. They personified the American Dream, becoming three of the biggest megastars of our time. In addition to performing solo segments backed by a 9-piece band, the show includes the ultimate trifecta as the stars unite for a moving, upbeat, patriotic finale to help honor America’s 242nd birthday.
Watch promotional video here: https://youtu.be/iYD6rG9HMo8On